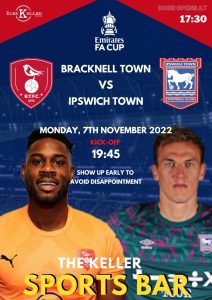 Support your team and bring your friends to watch the match on the big screen. We’re waiting for you at the Keller.

The fixture is arguably higher profile than the previous time Bracknell played in the First Round Proper back in 2000, away to Lincoln City, by virtue of the fact Ipswich are former UEFA Cup and FA Cup winners.