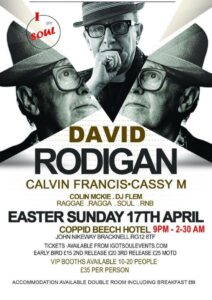 For over 40 years David Rodigan has been the top dog in the ganja-scented, bass heavy-atmosphere of Britain’s reggae dance-halls. The key to his success has been an unsinkable passion for reggae music, which first took a hold of him as a schoolboy when he heard ska music in the early ’60s. He developed an obsession with the music of Jamaica that generated an encyclopaedic knowledge of the island’s every artist, every song and every rhythm track.
Rodigan began his reggae broadcasting career in 1978 on BBC Radio London. He moved to Capital Radio in 1979 and remained there for eleven years broadcasting his legendary ‘Roots Rockers’ show every Saturday night. His credibility was ensured when he began clashing with Jamaica’s champion DJ, Barry G on JBC Radio in Jamaica. He then went on to clash with all the top Jamaican sound sys- tems in the West Indies, the USA and England.

Please note that access to Keller & Après cannot be guaranteed unless tickets have been purchased in advance.
Note: As a condition of entry to the Bier Keller and Après you will be required to provide photo ID and Fingerprint enrollment. By providing your ID you agree that your information may be used and shared with the police and other authorities. Failure to provide suitable photo ID will result in the refusal of admission