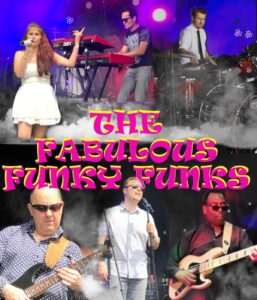 They are an energetic 6 piece Funk/Disco band that have been playing together for over 10 years.
The Funks was originally formed by Britain’s Got Talent’s semi finalist Jody T
Influences include James Brown, Stevie Wonder, Tina Turner and Bruno Mars. Also including favourites such as “Car Wash” “Disco Inferno” and “We Are Family

Note: As a condition of entry to the Bier Keller and Après you will be required to provide photo ID and Fingerprint enrolment . By providing your ID you agree that your information may be used and shared with the police and other authorities. Failure to provide suitable photo ID will result in the refusal of admission